Why we should watch “180 Days Well Spent” 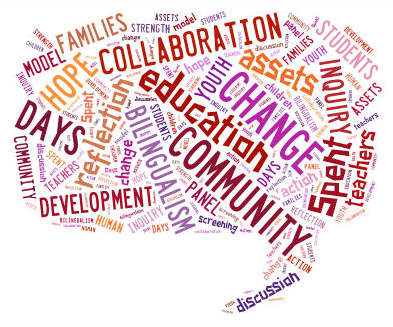 About a month and a half ago the good people at PARCEO (Participatory Action Research Center for Education Organizing), for whom I serve as a community advisor, invited me to moderate a panel that would follow a community screening of the short film 180 Days Well Spent. The film was created by a host of education and community-based people committed to transforming education to not only meet the needs of children but to inspire policies, practices, and, above all else, relationships that consider the development of the whole human being and a whole community.

The screening and panel discussion are this coming Monday, March 11th from 6-8pm at Cafe Amrita (301 W. 110th btwn Frederick Douglas and Manhatatn Ave.)

I was flattered by the invitation because I deeply respect the people who created the film, but I had yet to see the film, so when they asked me to prepare a few words to start the discussion I immediately began to wonder:

“Why should we/I watch this?”

First, we need to watch this film because education for the public good is, and has been, under attack.

The film does not delve into analysis heavily but  there are hints at the beginning and throughout the film about the convergence  of slow and steady disinvestment in our schools with the rapid fire of poorly thought out and punitive education reforms like high stakes testing, school closings, and school co-locations. Private funds are flowing into these reform policies but its parents, students and school workers who must deal with the poorly implemented mandates, surface-oriented evaluations, and the disruption and destruction of communities. As an emerging social movement teacher union caucus here in NYC, the Movement of Rank and File Educators (MORE), often notes: our working conditions are our students learning conditions. The conditions are clearly grim in many cases but something must be done and this film contributes to that by taking a very personal tone and perspective on these very challenging times.

Interestingly, the NYC Panel on Education Policy (PEP) meets the same night as the screening and they are reflective of the attack being waged on schools. The PEP took the place of the Board of Education when Mayor Michael Bloomberg recentralized the school system as a department under his direction. At this PEP meeting, like many that have occurred in recent memory, the focus is on the next crop of proposed school closings and co-locations (The Department of Education calls them “significant changes in school utilization”). There  is a false pretense that the PEP is a place for open, public commentary, but generally it has become a rubber stamp for a logic that seems to go  like this: “schools are troubled, so like any unsuccessful business, we need to shut them down, reorganize, and rebrand.”  The assumption is that this approach will make things better, but as Diane Ravitch, and others have noted, neither the schools nor the educational experiences of the students in struggling schools are improved when we close them or we throw another school into a  building. These reforms instead redirect problems and ignore and build upon the history of racial and economic differences and inequities that schools and communities have faced for years.*

The question then is what can a film like 180 Days Well Spent do?

This film is a model of how to take the fight into the public.

Like the Inconvenient Truth behind Waiting for Superman, 180 Days Well Spent is a powerful tool for raising awareness and articulating the needs of a community. The film also comes from collaboration , research and sustained relationship building, characteristics of transformative work.. The film also reminds us that transformative work  must have at its heart what communities want and an understanding of what already works. The film transforms business approaches to education by saying yes many of our schools are in trouble but instead of closing them, we are going to make our schools better by listening to and working with the people who  make up the school community and building on whats working. The film is not focused on what’s wrong with schools and what caused these problems. Rather the film wants to ask all of us including those of us who are in power and those struggling for change, to consider what we really want? Not being clear about what a community wants is used by those in power as an excuse for not taking demands for change seriously. It also keeps those who might not be involved in the struggle,  which are most parents and school workers, from standing alongside others in defense of pubic education.

The creators of 180 Days Well Spent make clear that their vision of a good school is one where children and families’ cultures and languages are  respected, and learning and development are focused on intellectual curiosity and opportunities to think, rather  than filling in testing grids.

I hope you can join us Monday for the screening and discussion, but if you can’t make it please watch the film with others and invite people to talk and to take action.

Ask yourselves what is OUR vision for good schools and what commitments must be made in order to make that vision a reality?

I can only imagine how wonderful it would be if the conversation at this Monday’s PEP was about watching this film and thinking about what we can all do.

*MORE is organizing against the closings and colocations for Monday as well, follow this link.