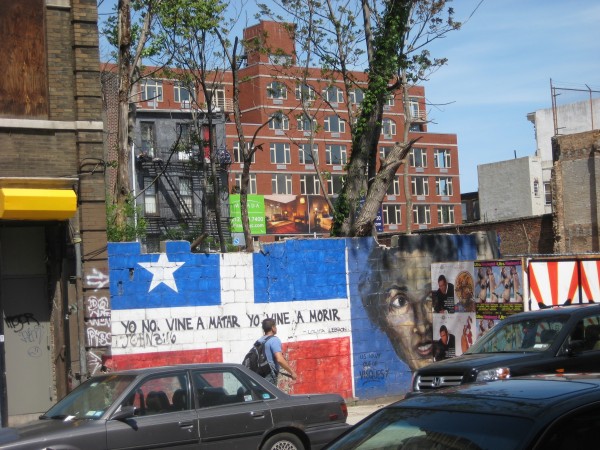 On Tuesday, March 19th the Participatory Open, Online Course (POOC), Reassessing Inequality and Reimagining the 21st-Century: East Harlem Focus (#InQ13), held a public screening of Whose Barrio? at the Silberman School of Social Work at Hunter College. Whose Barrio? is, as I mentioned on a post on the POOC blog, a:

2008 film, co-created by Ed Morales and Laura Rivera, that provides a nuanced and multi-voiced look at the changes that the neighborhood of East Harlem has navigated in the midst of the most current wave of urban renewal and gentrification.

At it’s heart the film gives the viewer a lens from which to see how market-driven gentrification couples with pre-existing and ongoing forms of social inequality to further divide communities and displace people in order to expand a troubling vision of community and neighborhood in the twenty-first century.

The film was also coupled with a panel discussion that included Ed Morales, the co-creator of the film, Felipe Luciano, a founder of the Young Lords, poet, and radio personality (among many things) and Dr. Marta Moreno Vega, artist, scholar, activist, and founder and director of the Caribbean Cultural Center African Diaspora Institute (CCCADI) (among many things). The film (for a short time) and the panel discussion can be viewed here: http://inq13.gc.cuny.edu/module-2/

There were a number of thought provoking ideas that were raised by both the film and the discussion, so I wanted to focus on a few ideas here before inviting others to comment on the event.

The theme of the night was “seeing” inequality, and we were thinking about inequality through the past, present and future of East Harlem. Trying to show the film and having a productive conversation was a lot to pack in, and it was clearly not enough time to engage all of these ideas. The event, as a whole, might best be understood as an invitation to engagements in thought and action (praxis) rather than an end. What is inequality? How do we see inequalities articulated within and across bodies, scale, space, and time? How are these formations of inequality interrupted, countered, or resisted? I invite others to use this post as a way to share some of their thoughts on the event and to meditate on directions for scholarship and activism.

Two points I wanted to raise here: the spatial-temporal destructiveness of inequality and searching  for streams of resistance through counter-storytelling.

The Slow Violence and Rapid Fire of Inequality The film and the panelists situated East Harlem today in the inequalities of the past, noting racialized housing opportunities, the entrance of heroin (50s) and crack (80s) into the neighborhood, the disaffection of Black and Puerto Rican/Latino youth, and disinvestment in infrastructure, as just some of the various forces and consequences at play. The stories that were told echo the disheartening, dominant story of East Harlem—a story of despair. Arguably, the dominance of this story both in the panel and  in broader discourses around East Harlem, is a limitation of the panel (and broader discussion) as it felt like conversations ended up dwelling on this story so much that we painted ourselves into a corner with very little time to find any opportunities for change; opportunities to find glimpses of hope. Still I want to give this discussion a generous read because as both scholar and activist I’m not interested in working around this dominant story, but rather thinking and working through it.

We were just beginning to get at the complexities of the ways in which inequality takes shape within racio-economic structures when the time for the conversation ended, but the notion of disinvestment is what most resonated with me. Disinvestment was mentioned fleetingly, but disinvestment, violence and drugs, were all introduced, Dr. Vega argued, by outsiders to the neighborhood—by design. It reminded me of what Rob Nixon (2011) described as “slow violence.” While Rob Nixon is speaking to the ways that environmental devastation is affecting our world (and we have only scratched the surface on environmental inequalities in East Harlem), a connection to disinvestment can be made. Nixon is giving attention to “calamities that are slow and long lasting, calamities that patiently dispense their devastation while remaining outside our flickering attention span…” (p. 6). Being forced to pay attention only to the outcomes (the spectacular) by media, government and private philanthropy, disinvestment clearly becomes a form of slow violence. We hear about a murder or the heavy drug trade, accepting racially and economically saturated depictions of entire groups of people and neighborhoods, but we are rarely asked to consider the structural causes aiding and abetting the continuation of these spectacles. Thoughtful scholars and journalists like Arlene Davila and Ed Morales remind us that East Harlem has never had a well-resourced and well-organized infrastructure to provide the necessary services and institutions to meet the varied needs of the community.

The resistance to slow violence has thus been piecemeal at best, leaving neighborhoods vulnerable to the rapid fire of what Nixon describes as “turbo capitalism.” We live in a time where reform and change is driven by collaborative efforts between the private and public sectors, and solutions thus become swift spectacles. Promises of luxury condos and rapid investment from private industry, or the closing of failing schools and struggling hospitals, become those spectacles that keep us from asking questions or examining situations more closely. Inequalities based both on racio-economics and time are thus rendered invisible. Disinvestment becomes spectacular, or visible, only when it has already left you in its wake.

To leave the discussion here would, however, reproduce the dominant narrative of despair without seeking some ways to confront the contradictions of slow violence and turbo capitalism. To come back to Nixon (2011) again, he notes that:

To confront slow violence requires, then, that we plot and give figurative shape to formless threats whose fatal repercussions are dispersed across space and time. The representational challenges are acute, requiring creative ways of drawing public attention to catastrophic acts that are low in instant spectacle but high in long-term effects. To intervene representationally entails devising iconic symbols that embody amorphous calamities as well as narrative forms that infuse those symbols with dramatic urgency” (p. 10)

I take Nixon’s words to mean that a key tool for combatting disinvestment in housing and education, for example, is what Xican@ and critical race scholars have described as counter-narratives (Acevedo, 2001; Solórzano & Yosso, 2009). From this vantage point the disheartening stories are not ignored/avoided, rather light is shed on them with historical nuance and they are then braided with stories of individual and collective struggles against oppression.

As Marina Ortiz, of East Harlem Preservation, noted from the audience last Tuesday, “we are not dead, we are very much alive, and we are still fighting…but institutions are being taken away from us.” The stories of the fights and what is being fought against are the stories that must continue to be told, to bring attention to the issues but to also begin to map and organize around alternative visions. Whose Barrio? serves as a powerful example of this kind of counter-storytelling.

Still, we did not sufficiently get into what stories are being told right now on the ground during the panel, as the discussion focused primarily on what might be described as the Puerto Rican legacy of East Harlem. Still, I have high hopes that this course will allow participants and the community to engage in the sharing of these new stories. How for example are Mexicanos, Dominicanos, Whites (non-Latino) or African American populations; or upper, middle and working class, populations (across racial-cultural borders), navigating the racial and economic changes of the community? What might youth or individuals with dis/abilities teach us? What about women, men, and LGBTQ, and gender non-conforming individuals? How might the stories and the interests of these varied groups converge into voices of struggle and voices of hope?

Finally, I wanted to end in thinking about outside scholar-activist, like me, who are interested in thinking through what it means to engage in community-based work in service to a community we are not from. There are many questions that have been raised by course participants regarding the need to do scholarship that is respectful and accountable to the community, and avoids us becoming, as Dr. Vega notes, “voyeurs” in a community. These tensions are very real for us, and I want to situate it within the notion of counter-storytelling. Nixon talks about the importance of writer-activists, who can “help us apprehend threats imaginatively that remain imperceptible to the senses” (p. 15). Nixon also arrives at the notion of being a witness, as a way of giving the “unapparent a materiality upon which we can act” (p. 16). In both the work of helping to apprehend imperceptible forms of, or being witness to, violence, our processes must be dialogic as a means to developing knowledge, maintaining humility, and envisioning the future. As outsiders we potentially provide outsider’s eyes to the intricacies that many people must confront. Our perspective can provide nuance to those counter-stories, but it is not a replacement. This work requires humility on the part of the scholar-activist as well as a humanization of the collaborator. It is the partner that is front and center, and it is in our emerging relationships with them that slow violences and new futures can then be rendered visible. It is also in these dialogues that we can, collectively, begin to develop iconic symbols that shed light on slow violence, highlight resistance, and make urgent already emerging demands for change