Making room for classrooms?: Land grabs and the destruction of school communities 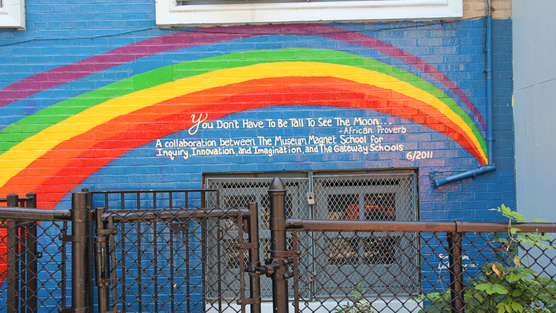 The three sites are truly special opportunities as they present sizable developments within submarkets having limited available land for any substantial development, and are located within neighborhoods exhibiting exceptionally strong residential market fundamentals. They are among the few chances remaining to build large projects in their respective neighborhoods. – RFEI created by CBRE for the NYC Educational Construction Fund ‘As NYCHA announces plans around selling off of pieces of land to condo developers this week, and libraries have begun to sell off their land footprint in order to remain open, the frenzy over real estate has all too quietly continued within the New York City public education system.

In February of this year the Westside Rag broke the story about New York City proposing to demolish three schools and offer the land and air rights to real east developers. These proposed plans have led to east and westside turf wars between real estate developers and local school communities that hardly anyone is talking about.

PS 191 (W. 61st St) and PS 199 (W. 71st St.) on the Upper West Side and CO-OP Tech (CTE) (E. 96th St) on the Upper East Side/East Harlem (depending on who you are talking to) are the targeted schools. In exchange for rights to develop on each school’s footprint and providing city funded support, developers would be required to integrate the schools into the bottom floors of the new condo high rises.

I began following this story in February but little was being said after that initial volley in educational news streams. I was recently re-engaged in the issue when a former teacher education students of mine who is now a teacher at PS 191 asked me to sign a petition in support of saving her school.

This story begins with parents from the schools discovering a glossy 82 page “request for expression of interest” (RFEI) that was prepared by CBRE on behalf of the NYC Education Construction Fund, offering these three sites as some of the last ‘sizable’ pieces land left for speculation in these regions of Manhattan.

The Executive Summary says it best:

On behalf of the New York City Educational Construction Fund (“ECF”), CBRE is pleased to offer for your consideration three prime development sites, two of which are located on the Upper West Side, and one on the Upper East Side. The three sites are truly special opportunities as they present sizable developments within submarkets having limited available land for any substantial development, and are located within neighborhoods exhibiting exceptionally strong residential market fundamentals. They are among the few chances remaining to build large projects in their respective neighborhoods. Prospective respondents are invited to bid on one, two, or all three sites. Prospective respondents should be aware that the number of sites transacted will be largely determined by the quality of the bids and the decision of the ECF.

“On the surface the proposal is being depicted as something wonderful to embrace,” said Madeline Bender, mother of a PS 191 pre-K student and the incoming PTA president, “but there does not seem like there is anything [about this] that is conducive to learning.” In speaking with Ms. Bender and Stacie Lorraine, a teacher at PS 191 one of the co-leaders of the MMS/PS 191 redevelopment committee, there has been no meaningful engagement of the various school communities being affected by this proposal, the plans for providing a temporary educational space for the displaced students has been poorly communicated and potentially inadequate for the students, and undermines the tremendous progress the school has made in recent years.

In this blog posts that follow I want to document what’s been happening (starting with PS 191) in order to encourage others to, first, stand with these school communities and, second, to suggest how this struggle is yet another lesson on the ideas and practices of free-market driven, colorblind, education policy that dominates our time.

For now I want to direct your attention to No Demolition Website, the petition, and today’s march and rally.