Political Organizing Beyond the Election: An Interview with Rosa Saavedra 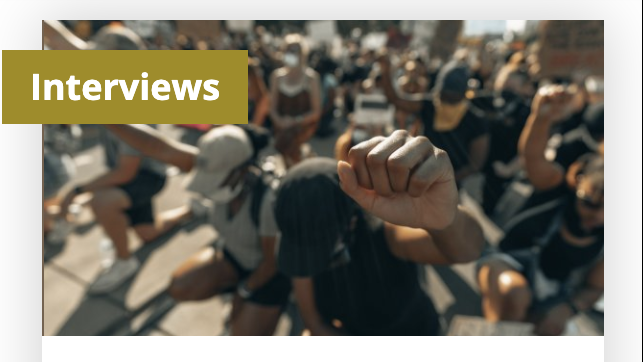 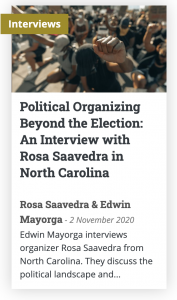 In October 2020, just before the national election, I interviewed political organizer Rosa Saavedra from North Carolina for Metropolitics, a peer-reviewed online journal that publishes short-form work about cities and urban politics.We spoke about the political landscape in North Carolina as the 2020 US presidential election is taking place.

Originally from Chile, Rosa has resided in North Carolina since 1980. Rosa has worked for over two decades in various state, regional, and national organizations developing and executing strategic community-engagement plans designed to maximize the input and involvement of marginalized populations. She is experienced in working with disenfranchised community members to build leadership from within, utilizing asset-based and participatory methodologies.

We discuss the political landscape and community organizing beyond voter mobilization in North Carolina.

A lightly edited transcript is published below.

Link to the interview: https://www.podbean.com/ew/pb-vwjfs-f11d65

An extended version of the interview will be posted on encuentros políticos soon.

Edwin Mayorga: Buen día, I’m Edwin Mayorga, an associate professor of educational studies at Swarthmore College in Pennsylvania and a member of Metropolitics.

I recently spoke with political organizer Rosa Saavedra about the political landscape in North and South Carolina as the 2020 US presidential election is taking place. Originally from Chile, Rosa has resided in North Carolina since 1980. Rosa has worked for over two decades in various state, regional, and national organizations developing and executing strategic community-engagement plans designed to maximize the input and involvement of marginalized populations. She is experienced in working with disenfranchised community members to build leadership from within, utilizing asset-based and participatory methodologies.

I began by asking Rosa to talk about her current work and what she sees as political mobilization and organizing in North Carolina.

In terms of political mobilization and organizing in North Carolina, I have a split view: what I see that is there, and what I see that’s fallen through the cracks. And that’s what I focus on. For example, the efforts that I’m working on come in terms of elections.

I’ve been working with folks for about two years, but it took six months to get them introduced to the idea that you don’t follow somebody—I might be the organizer here, but you don’t follow somebody. They’re ready to follow, and sometimes when people take a leadership role they take on a hierarchical role, and you have to still not do that. So it still means that the integration of regular people isn’t included in this work. It’s difficult. It’s not there yet.

Right now I’m working with a group that just formed, and we’re groups of different people working in different organizations. It’s just beginning to grow, just beginning to bring people in, and finding out how to talk to our city council. This group has already been listed as something, I forgot exactly what it was—you know, next step to terrorists, basically. [Laughs.]

Rosa: A threat, yeah. And that pissed people off. That’s the best thing that could have happened because it’s just people who are voicing their opinion, and what you’re faced with is “shut up.” That’s the perspective that I see in North Carolina. There’s a wave of how things have been organized and how things continue to be organized in terms of even getting out the vote. The people on the ground are not feeling their power as individuals, but rather they’re being corralled, which they go along with because they understand the reasons why—to vote. That’s a missed opportunity; that’s mobilization. Now, desperation—I understand that. I mean, these are desperate times that call for desperate measures. But we cannot always stay in mobilization.

Rosa: There’s this mobilization movement going on to register people to vote, get people out to vote, and make sure that voter suppression isn’t happening—all very important. Those are the three main things that have been going on in North Carolina, in both the rural and urban areas. I don’t really know too much about the white community. I know about people who are not going to be Republicans, who are going to be Democrats or even more socialist. So those are the people that I kind of know more about. I think the number of votes is going to be huge—which is great—but this is an opportunity to be able to make sure that we get into the communities, not just “get out and vote,” but how do we handle these problems that we are seeing in our communities? How do we go and have these meetings with elected officials?

When I first started taking Bread for the World folks to visit their members of Congress, because they focus more on the federal level—you’re not beholden to these people [Congress members], and you don’t have to ask them. You have to come in with a dialogue. How are you going to begin this dialogue? What I see from all this is a deficit in civic engagement, and it’s no surprise, it’s nothing new. But when you see it in your face, you cannot believe it—the people that we think we’re going to engage with, we’re not going to engage them with tactics that are more, like, “I’m grateful that you’re meeting me.” No! We have to develop in our communities. Like they do, for example, in asambleas. If you have asambleas and talk about what it is that you want to engage them with, then it’s not just about you going in there saying what you want, and they say whatever they’re going to say, and you leave, and you don’t know what happens. There’s got to be this engagement beyond the election.

Edwin: In talking and thinking about this as a moment of opportunity, are there particular issues that are particularly salient and possible ways to rally people together around their kind of political awareness and engagement?

Rosa: Yes. People are not politicized. Political awareness is very low, and some of that is because our words have kept people dormidos [asleep], like a baby. Your baby will sleep until you make a noise and then the baby wakes up. Well, it’s kind of the same thing. We’re not using the words that will wake people up. It’s beginning to change some spaces. The constant use of “food security, food insecurity.” But when you hear “food apartheid,” it’s “Wait a minute…” There’s a political element. The same thing with mental health. I keep hearing “mental health, mental health, mental health.” You’re familiar with Franz Fanon? If I don’t hear “oppression” in mental health, then I don’t know that it’s political, it can be political. It’s not, “what’s the political impact of mental health?” But, “what is the impact of politics? What’s the impact of oppression on mental health?” And we’re always hearing it the other way around.

So, we’re not hearing things. What do we hear with gentrification? We hear “affordable housing.” But do we understand that it is really an ethnic cleansing? And people who are now called “gentrifiers,” when you become complicit with ethnic cleansing, it doesn’t matter if, after you’ve been complicit in clearing out a black community, you have a Black Lives Matter sign on your front yard, which they do—they are not politicized. For regular people, that creates a lot of, not only anger, but a sense that you cannot work with that, because those people cannot see what you see. You’re seeing something that is not being seen, and then on top of that you’re being told to try to see it from their point of view.

Edwin: How do you think this election is going to turn out, and what work do we have ahead of us?

Rosa: I think that people are not going to vote for Trump because I do believe his base is very small. There are a lot of people who won’t be voting for him, even as Republicans. I don’t know that they would vote Democrat, but I think that that will have an impact, one way or the other. But I also know that there are a lot of people who are voting as if their lives depend on it because he’s shown us that it does. And the good thing is that communities have risen up, and community people have been speaking out. I think organizations have also moved a lot on this.

It kind of reminds me of 2006 when there was this mass immigrant—this beautiful, magical moment. But what didn’t happen was that connection. It was there—it was there because people heard it. All you need is a whisper. That’s where the disconnect came, and there are reasons for that. There are factors that impact that, and a lot of it is financial. The Latino community has been under a tremendous amount of economic oppression. You can’t work two jobs and still do everything else—you can, but you have to do it differently. SNCC (Student Nonviolent Coordinating Committee) did it that way. We have to start getting into relationship with each other—and I’m not saying the way of the past, in terms of SNCC, but in the way that humanity moves forward together. It’s in relationship.

Humanity as a whole doesn’t move forward together; humanity suffers from the movement of some people up while the others are oppressed. I feel like this political climate is one that offers opportunity. So the work that I’ll be focusing on after this is going to be very much about building like a telaraña [spiderweb]—they seem very delicate, but they do catch. I’m not saying that’s the solution. I’m saying I’m going to invest my time and my energy in as many ways as I can, and by as many means as I can, to connect regular people with each other. And to exigir [demand]—because that’s the right word—exigir that the institutions—whether they be elected, government institutions, nonprofit institutions, institutions of education—be the ones that the community web catches. There has to be this level of strength that knows that we can enfrentar [confront] what’s coming at us, and it’s not coming to destroy us. We’re going to trap it, wrap around it, and make it conform to what our needs are.