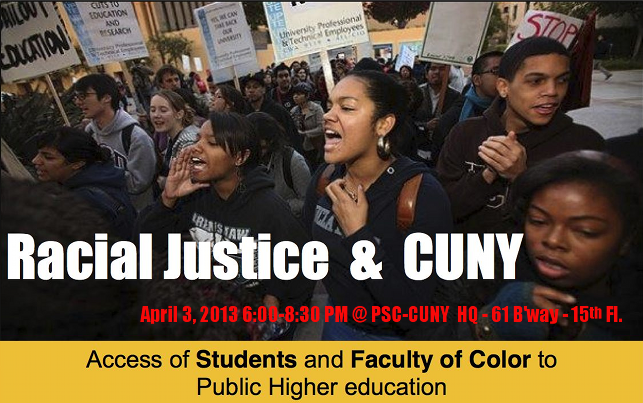 CUNY remains one of the most diverse college systems in the country. Yet black and Latino students are now far less likely than they were before 2009 to be enrolled in a CUNY senior college, particularly those in the top tier, where student outcomes in terms of retention and graduation are far higher than they are at the community
college

Recent reports have brought to the fore, again, the racio-economic inequities that exist within, and reproduced by, higher education institutions. These reports are specifically  about the City University of New York (CUNY).

On Wednesday April 3rd the Professional Staff Congress/CUNY and The Public Science Project are jointly sponsoring a Forum on Racial Justice and CUNY. The event promises to be an exciting dialogue on student and faculty diversity at CUNY.

The event will be held at:

Respondents:
Michelle Fine, Distinguished Professor at the CUNY Graduate Center in Social Psychology and Urban Education; and
Edwin Mayorga, a student in the Ph.D. Program in Urban Education at the GC.

Forum facilitator:
Paul Washington, HEO Associate at Medgar Evers College and Chair of the PSC Committee on CUNY and Race.