A Plea for R-E-S-P-E-C-T, Guest Post by Mark Stern on Rally at SRC #PhlEd 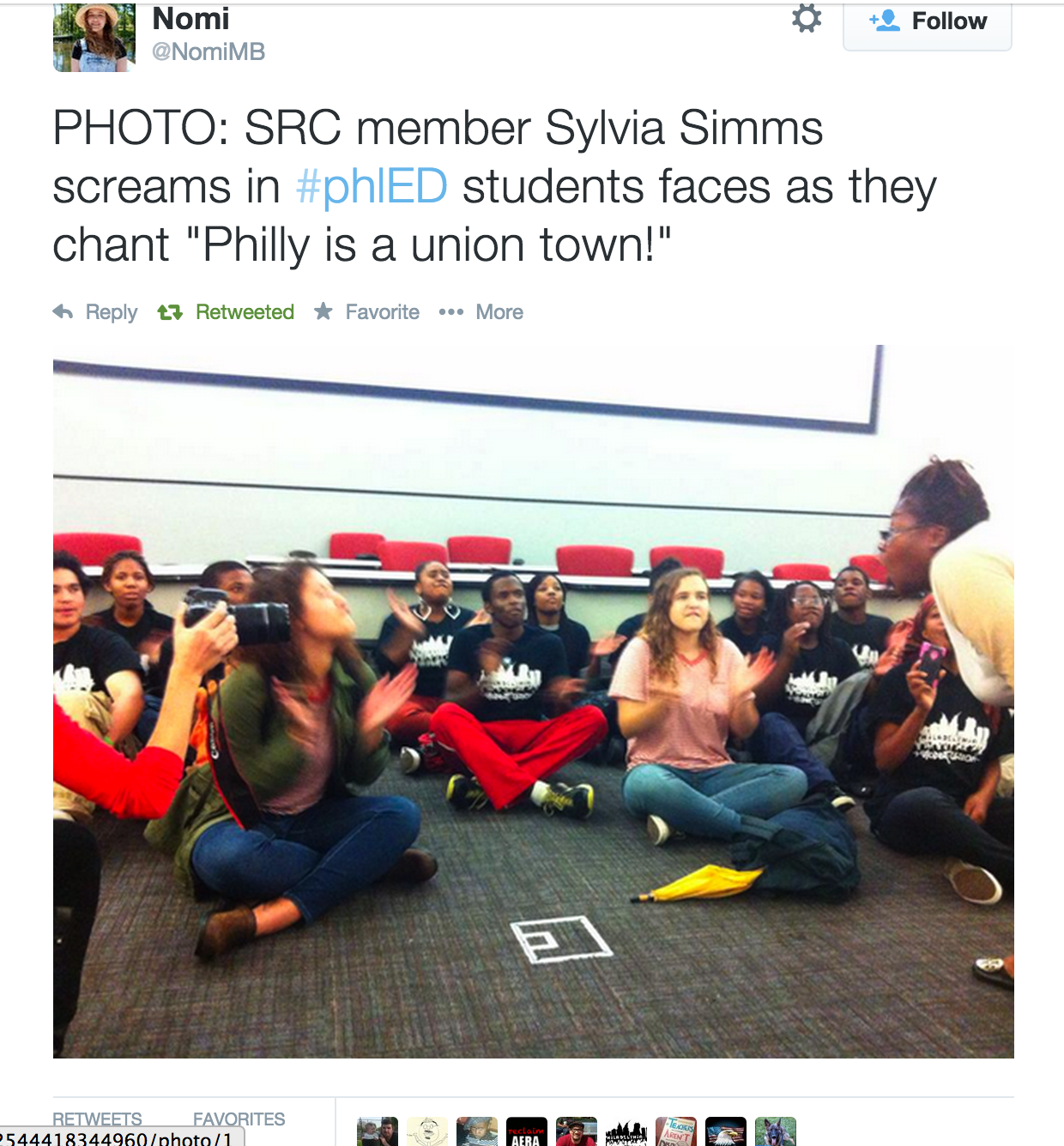 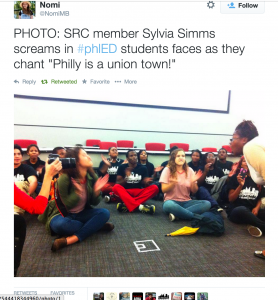 I imagine that Aretha Franklin educated many on what respect means and how to spell it.  Her 1967 cover of an Otis Redding tune became popular at a time when civil rights in relation to race, class, and gender were on the minds of many.  She leaves no room for misunderstandings about what she wants.  She just spells it out: R-E-S-P-E-C-T.  No confusion.  No metaphor.  No nuthin’.  “Give me my propers [what today we might call props],” she demands.  Give it to me.  And, as with any good demand, therein also lies a threat: see what happens if you don’t.

I was thinking about Aretha last Monday when the School Reform Commission (SRC), the appointed board that oversees the School District of Philadelphia (SDP), “cancelled” the contract of the Philadelphia Federation of Teachers (PFT).  Many people and organizations—The Caucus of Working Educators, Tamara Anderson, and Dan Denvir, to name just a few—have done a huge public service in providing invaluable analysis as to what happened and the severe ramifications that this decision (and the many before it) will have on teachers, students, families, and tax-payers.  The forecast isn’t great: cloudy with a chance of privatization.

My own research examines events like what happened on Monday from the more macro intersections of education policy, political economy, and that still unrealized ideal that we call democracy—an ideal profaned in contemporary policy debates by mischaracterizing test scores as achievement and school choice as freedom.  Though Philadelphia has its own particular narrative (cameos by Paul Vallas, Edison Schools, and Tony Danza to boot!), what has been happening to our schools is symptomatic of a much larger and more global trend. For every school closing or laid off teacher here, there are school closings and laid off teachers across the country and the globe.  I don’t say this to suggest that, because it’s happening elsewhere, it’s OK for it to be happening here.  Hell no.  But this does mean that we are not alone in our predicament—a fact that is as terrifying (many others are going through similar tragedies), as it is hopeful (there could be real power in numbers).

If you’ve ever heard Dr. King or Malcolm X preach, listened to songs by Woody Guthrie or Janelle Monáe, seen art by Frida Kahlo or Carrie Mae Weems, or watched The Boondocks or (I’m pretty sure) The Hunger Games, you and I might hold a similar analysis as to what the big issue is in public education (aside: would Dr. Hite or Chairperson Green describe Katniss as rightfully sharing in the sacrifice of District 12?).  To be sure, there are conversations to be had about district bureaucracies, fiscal inefficiencies and the like; however, these conversations presently function as distractions from addressing the real issue: how power functions in this country, most especially in relation to race and class.  And, at its core, this issue has everything to do with R-E-S-P-E-C-T and, therefore, Aretha.

What happened the other night was, among other things, straight up disrespectful, not to mention a blatant erasing of democratic process.  Having a disproportionate amount of the city’s Black and Brown children attending underresourced schools is, too. So is paying someone $7.25/hr. and so is the way young Black and Brown men are abused by the criminal punishment system.  Moving jobs overseas (or to Delaware) to increase profit margins that trickle into the bank accounts of just a few: also. So is closing down community schools, pushing communities out of their neighborhoods for a new sub/urban townhouse, extending XX-year tax abatements, exploiting domestic workers, discriminating against the queer and trans community, stereotyping Muslims, and trumping Native American claims to land rights.  I could go on.  What I’m saying is that what happened Monday was, in the particular, about teachers and education, but it was also symptomatic of something larger and more pervasive, a pervasiveness that tells us something about the society in which we live.

When basic needs aren’t being met, and where many groups have competing claims about being disrespected, it’s often difficult to think about solidarity. Too often, we find ourselves hating on each other: my issue is more important than theirs.  Disrespect breeds more disrespect.  It keeps us separate and, as the sociologists might say, it keeps us from seeing the forest (society/collective) because we instead only see ourselves as trees (individuals).  Disrespect gets in the way of seeing ourselves as the people, united, and, therefore, it also keeps our threat (See what happens if you don’t respect us!) in check.

On Thursday, the SRC will meet at 440 Broad Street.  Many are planning to show up around 4:30 pm to support and show solidarity with the PFT.  Encouraging movements have already begun with the #solidaritywithteachers campaign.  But it’s important, too, that we think aboutThursday as more than just about education and teachers.  Though what happened with the PFT is the particular reason we are showing up, Thursday might also be framed as a rally against disrespect, a place where we express our collective anger, disgust, and frustration. Thursday could be an Aretha-inspired event, a party even, where we stand up as trees—with our roots overlapping and entangled—and present ourselves as a forest. Where we collective and forcefully say: Give it to us.

Mark Stern is an Assistant Professor in the Department of Educational Studies at Colgate University and currently a Visiting Scholar in the Education, Culture, and Society Program in the Graduate School of Education at the University of Pennsylvania.  He can be reached at: mstern@colgate.edu